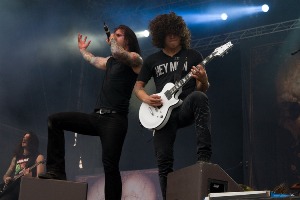 The musical genre, which called MetalCore consists out of the mix of different genres, such as: hardcore, punk, thrash and melodic death metal. Its music mostly has an aggressive pace with lingering guitar solos and overall unusual sound of guitars and drums. Vocals also are very different and can vary from screaming to lower much more calm voice.

Due to the great influence of other musical genres MetalCore is appearing to the listeners in different forms, that is why it often compared with New Metal and some other metal trends. Metalcore is incorporated in itself many styles that at the end became its core. And that goes for the music as well as for the themes of the songs. Lyrics of the texts of the songs mostly talk about different aspects of being, and some bands prefer to talk about mystic and religion.

MetalCore was formed by the end of the 80s and beginning of the 90s. However at that time crossover genre included some famous bands such as Dirty Rotten Imbeciles, Suicidal Tendencies was very popular. These bands included in their music elements of hardcore and thresh, but the genre quickly died out. And its place was taken by the MetalCore performed by Integrity, Madball, Earth Crisis, Deadguy bands. During the following years these bands and a lot of others were perfecting this genre, incorporating in to the music new and unique techniques. And by the middle of the 90s this genre became popular and famous around the world.

Hatebreed, Converge, Soul Embraced, Starkweather, Judge, Bloodlet, Antagonist, Cave In, Vision of Disorder, Candiria, Bullet for My Valentine, As I Lay Dying, Caliban, Callisto Arkangel, Strife, Agony Scene are amongst most of the famous bands performing in this genre.

© www.metal-tracker.com   Photo As I Lay Dying
Back to top