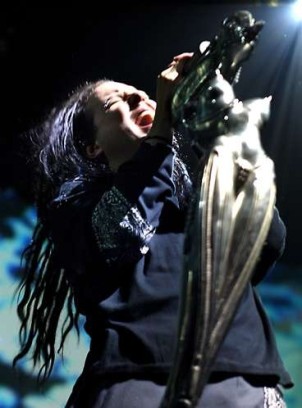 Nu Metal is a name for everything new and unique. This genre consists out of mix of the alternative metal with grunge, thrash, industrial, funk, hip- hop and electronic styles. Because of this unprecedented cocktail music performed by most bands that are following Nu Metal genre can vary, but it have some special features. Guitar sound is very heavy and powerful with strong distortional and various guitar effects. Very often followers of the genre are using seven-stringed guitar or baritone guitar, and five-string bass guitar that give to the music more rich and harsh sounding. Besides the usual drums very often musicians use percussion, and multi-stage drum set. Also most of the bands which are playing Nu Metal incorporate in to their performance electronic samples, that enhance music with special sounds. Vocals in this genre are very emotional and can vary from the violent scream to the more calm emotional recitative. Songs lyric includes vast variety social and personal problems. In their texts musicians express their fillings shock, depression and even suicide thoughts. But sometimes we can find bands singing about all kind of things without any boundaries.

By the end of the 90s popularity of Nu Metal was growing and many bands started to soften their music and instead of the usual heaviness and aggressiveness musicians paid more attention to the melody of their compositions. The most influential bands following the Nu Metal are Machine Head, Linkin Park, Incubus, Sevendust, Staind, Mudvayne, Cold, P.O.D., Drowning Pool, Godsmack, System Of A Down Papa Roach, Ill Nino and some Russian bands such as Amatory, Tracktor Bowling and Slot.