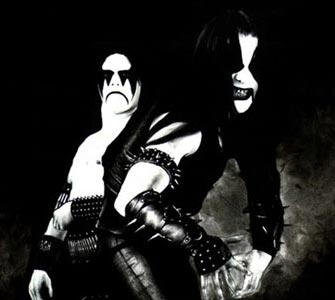 Musical genre black metal differs from the other musical trends with its monotone guitar technique and crazy drums. Besides the fact, that black metal is fairly heavy music, it is a very artistic music with an unusually high cutting sound. Apart from the typical musical instruments, used in creating this intense style, very often musicians apply some exotic musical instruments, such as violins, basses, keyboards and other.

Singing represents sudden wheezing scream, sometimes with a touch of slight growling. Musical genre black metal emerged in the beginning of 1980's; however its best years were experienced primarily in Scandinavian countries at the beginning of the 90's. The name of this musical genre comes from the name of the album called "Black Metal", which was produced by the English band Venom. This famous band did not play black metal; never the less they are as well as bands Sodom and Bathory are considered to be one of the founders of this musical genre. By the end of the 80's this genre was also played by Mayhem and Burzum. Fame of this musical trend became apparent which helped emerging many other bands, and by 90's we saw creation of Impaled Nazarene, Immortal, Burzum, Marduk, Beherit and many others, who spilled a lot of blood , violence and blasphemy in to their music.

In the beginning, the genre was a part of the movement against official Christian religion, and that was very clearly incorporated in to the verses of songs as well as the behavior of many members of the earlier created bands. Sometimes they allowed themselves to go as far as burning churches, but in the following years music grew in to the independent movement, often combined with Gothic, Death and Doom Metal styles, and such spread out beyond the Scandinavian boarder. This musical genre made a name for itself in the history of music as one of the most extreme metal movements in the 80s. The best liked themes of this musical trend is Satanism, occultism , Nazism , war , violence , and sometimes even paganism.

As well as in any other trend of extreme music, black metal, shows a lot of attention to the image, which is very often, makes a clear distinction between musicians, who are playing Black Metal from any others. All their appearance is full of black color, which gives them sort of a demonic appeal, and makes them, look like corpse. Classical scenic image of a Black metal band consist out of black and white makeup, clothing are made out of black leather, including capes and cloaks with a hood, different amulets, as well as the old warrior costumes, and a lot of nails attached to the collars, belts and boots. On the album covers of most of the black metal bands we can see images of different natural landscapes as well as wild animals, depicted in the night time. More often used images of forest, snow, fog, wolves, sea, goats and mythological characters.

We can rarely find a clear black metal music; usually the genre includes many sub genres, which gives it a slight different tone, as well as influence content of songs and the entire atmosphere which surrounds such music.

© www.metal-tracker.com   Photo Immortal
Back to top