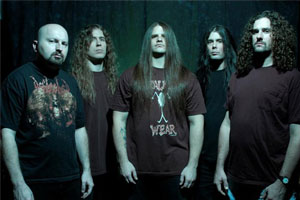 Brutal Death Metal - is much more extreme and brutal, then the original Death Metal. This style has a more rapid and forceful rhythm section and a distinctive sound.

Singing in this genre consists out of a strong and deep growl, which is very often passed through a harmonizer. If we would consider a gravity of the sound effects, produced by the guitar and bass used in this Genre, as well as the complexity and aggressiveness of the vocals, we can, without any question state that Brutal Death Metal, up to this day has no competition. Similar to the authentic Death Metal, themes of the lyrics, used in the Brutal Death Metal filled with all sorts of echoes of violence and death, which is also very clear in the way members of the bands are dressed and from the look at the design of their albums.

Brutal Death Metal formed as a sub genre from the original Death Metal and started to grow in the separate movement, while form time to time collaborating with the Grindcore , which had its influence on the genre of the Brutal Death Metal. Beginning of the genre takes place in the early 90s, marked by the making of the new albums, produced by several famous bands, such as Cannibal Corpse, Immolation, and Suffocation. Those bands unknowingly started to create a new genre by making their music sound heavier then ever before.

By the end of 90s Brutal Death Metal was quickly spreading out, and that helped forming of the new bands, who continued to promote a new genre, making it better and more professional sounding. Amongst the most famous bands, playing in this genre we would name Cannibal Corpse, Sinister, Deranged, Morbid Angel, Cryptopsy, Broken Hope, Disgorge, Brutality, Vomitory, Vomit Ramnants, Suffocation, Burial.