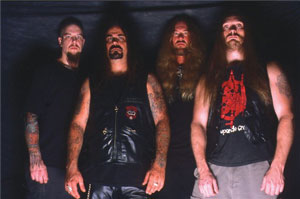 Death Metal - is a really aggressive music, with extreme drums rhythm and a heavy guitar. Vocals in Death metal like another musical instrument that has its own character, usually it does not have any real melody. Instead vocals sound like one extreme hollow roar. This genre in our opinion is one of the most difficult for the unprepared listener.

The main theme of the songs is death and all of its stages, including violent death and natural one with clear description of the way it happened. Usually songs talk about corpses, epidemics and various manifestations of demonism. This theme also found its way in to the name of the genre, as well as the names of the bands and pictures shown on the album covers.

Death Metal bloomed at the end of 80s and pioneers of the genre can be considered USA bands, but in the beginning of the 90s the trend quickly spread out to the European countries. One of the most influential bands belonged to the genre is Hellhammer, later they became Celtic Frost. This was the heaviest band with a uterine vocals and harsh guitar riffs. Famos band called Death also exerted its influence on the genre. Afterwards three main schools of the genre were formed - American with bands like Obituary, Deicide, Malevolent Creation, Resurrection, Sweden - with bands like Entombed, Dismember, Edge Of Sanity, Grave and European - with bands like Morgoth, Protector, Atrocity, Benediction, Bolt Thrower, Carcass.

In the beginning music of Death Metal did not include any melody, but with time, when the genre started to mix with other musical styles such as Black, Doom, Thrash, Heavy Metal, music became more complex and bands who played less harsh, heavy and aggressive Death music started to grow and influence the genre.

© www.metal-tracker.com   Photo Deicide
Back to top