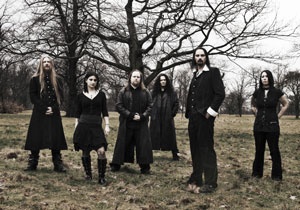 Music created in the Doom Metal genre can be characterized by the heavy and dark atmosphere, filled with sadness, depression and melancholy. Doom Metal usually have a slow and drawling pace, due to its low -tuned guitars and wide usage of the discordance in a compositions.

While talking about the sounds produced by the genre we should point out on the viscous and low-frequency reefs, sparse percussion, and slowly decaying solo. Also important role is given to the exotic instruments, such as keyboards, flute and sometimes even organ. Vocals can be clean, produced by man or a woman as well as with a touch of growling, but same as in the Doom Metal genre, the most important is slow pace of the performance. Even though this genre is considered to be one of the heaviest listeners think of it as an expressive and melodic.

Song lyrics include depicting of the special feelings, created by sadness, loneliness, depression hopelessness, despair and death. Sometimes while creating lyrics, bands playing in this genre turn towards religion. One of the founders of the genre we consider an English band Black Sabbath, who in 1970 produced an album called "Black Sabbath". Album sounded like Hard-Rock with slow and leisurely elements. Music produced by Black Sabbath at that time did not look like the music which is now considered as Doom; however their music gave a start to this genre, followed by other bands such as Pentagram, Black Widow, who also influenced on to the forming of Doom Metal style.

Most powerful time of the Doom was in the 80s, where new bands such as Candlemass, Saint Vitus, and Trouble were formed. In their music we felt more and more desire to perform in a slower pace, funeral epic and some brutality, but the compositions were still filled with a heavy metal. In the beginning of the 90s scene started to change and new generation of bands we formed. These bands are Paradise Lost, My Dying Bride, Cathedral, Tiamat and their music gave to the genre its real and fully formed style. However at the same time the original Doom Metal started to enrich their music with elements of different genres such as Gothic, Death, Black Metal, and that helped to create new sub genres. But at the end of 90s many bands started to drop their brutality while moving towards more gothic projects, such as Paradise Lost, Tiamat. All of the changes resulted in the fact that original sounding of the bands, performing in Doom Metal genre became lighter and started to get out beyond the boundaries of style.

© www.metal-tracker.com   Photo My Dying Bride
Back to top