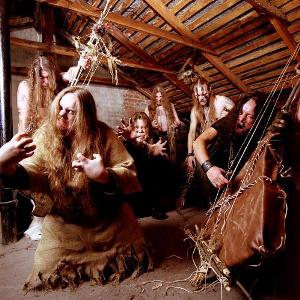 Folk Metal is the musical genre representing a mix of folk and ethnic music with a heavy metallic sound. Musicians who are performing in this genre are trying to make their music sound of the folk music, by adding to their compositions some folk elements. Besides the typical musical instruments that are used in creation of the metal music, such as guitar, drums and bass, folk metal have national and old musical instruments such as violin, bagpipes , ethnic drums, flutes and modern synthesizers.

Vocals of the genre can be very diverse; we can find a clean voice as well as a growling or even screaming sound. Often musicians use traditional folk singing, where voice and the way song is performed can be constantly changing.

Themes of the song lyrics in this genre usually are based on the old folk songs, poems, fairy tales, and legends. In their lyrics, musicians more often talk about nature, paganism, fantasy and mythology.

Forming of the Folk Metal genre was in the beginning of the 90s. Its founders considered to be Skyclad band. In the album, called "The Wayward Sons of Mother Earth" which was produced in 1994, members of the band mixed Celtic music with a thresh metal. Also in 1994 came out album, which was called "Tales from the Thousand Lakes" by the famous Amorphis band, project was designed to be a mix of Death Doom metal with element of the Finland folk music, followed by forming of other bands performing in this genre such as Cruachan, In Extremo, Otyg, Windir, Tuatha de Danann, they continued creating the style of Folk Metal. By the middle of the 90s doe to the fact that each band performing in this genre was adding to the music an elements of their own ethnic culture, Folk Metal became popular and well known around the world.

By the end of the 90s were formed bands such as Falkenbach, Windir, Moonsorrow, Vintersorg and Thyrfing, they created music which was a mix of Folk Metal with a Viking Black Metal. Lyrics of the compositions talked about Viking themes and music very often included a lot of keyboard sounds. Also Folk Metal often turned towards the pagan ideology with a help of Cruachan, Butterfly Temple bands. Listeners recognize this genre as Pagan Metal. Today genre of the Pagan Metal is very popular and famous trend of the metal genre, including a lot of interesting bands all over the world. Besides the already mentioned bands we want to name bands like Finntroll, Korpiklaani, Morgenstern, Elvenking, Skyforger, Ensiferum, Folkearth, Agalloch.

© www.metal-tracker.com   Photo Finntroll
Back to top