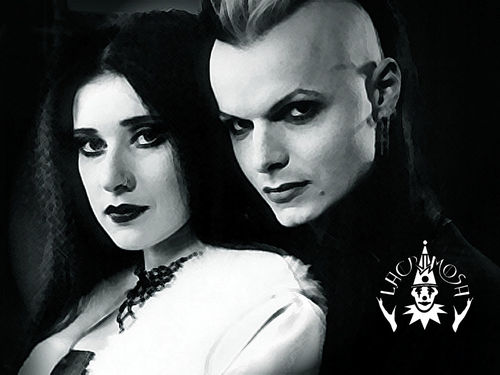 Gothic Metal - it is a very depressing music with a slower pace and almost without a solo. Vocals usually consist out of clear man's voice, with a very rare touch of growling and screaming, and addition of females "angelic" singing, sometimes the recitative. Often in creation of the Gothic Metal used synthesizer as well as elements of the symphonic music with choral accompaniment.

Song lyrics can have a wide variety of themes, but mostly songs talk about philosophy and romance. Compositions can express different fillings, developed by sadness, depression, and frustrations, as well as death, mysticism or paganism.

We want to also point out on the uniqueness of the image which is portrait by the members of Gothic Metal bands. Their main difference is black color used in clothing and make up, sometimes with a touch of red or other shades, as well as the long hair, colored in black sometimes with touch of white. Members of the bands performing in the Gothic Metal genre also express interest towards the silver jewelry, different amulets, chains and crosses and of course piercing. Females have a very distinct "vampire" style with elements of the medieval and vampiric sexuality. Males are recognized by the "raven" style, with strict black clothes, such as for example a long coat.

Gothic metal was formed on the base of metal without certain extreme sound and with gothic themes, which gave to the music sort of a melody and melancholy. As in all of the gothic culture music of this genre included a part of the medieval darkness and sophisticated romantic mood.

Gothic Metal began to form in the first part of the 90s and founders of the genre we can consider Type o Negative band with their album "Bloody Kisses", My Dying Bride band with the album called "Turn Loose Swans" as well as the Paradise Lost band, who produced albums after 1995. In the albums created by Paradise Lost band became very popular ad to the compositions different samples of electronic music. The other influential band of that time was Lacrimosa, wich produced an album called "Іnferno". Songs of this band became a very clear example of the first Gothic Metal. Also we want to point out at the bands which we consider not less influential to the genre, those bands are: The Gathering, Theatre of Tragedy, Dreadful Shadows, Within Temptation, Love Like Blood, Anathema. Most of the bands including the ones we named added elements and touches of other genres such as Doom, Black, Death Metal, and that in our opinion was the most meaningful and recognizable addition to forming of the new genre.

© www.metal-tracker.com   Photo Lacrimosa
Back to top