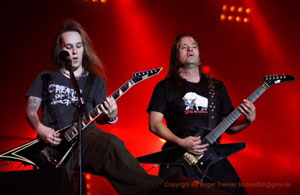 Unlike the original Death Metal, Melodic Death Metal consisted out of wide variety of riffs as well as abundance of melodic guitar solos and sometimes even with use of the keyboards. Sound of the genre is somewhat similar with Power or a Speed Metal, but the vocal is much clearer for the male or female singing with a slight roar, which this genre adopted from Death Metal. The theme of songs performed in this genre by comparison with an original Death genre does not include deaths and other grim associations. Songs talk about more positive things, and various topics of being.

Forming of the genre Melodic Death Metal began in the early 90s mostly in Scandinavian countries. Founders of Melodic Death Metal can be considered band At The Gates, which in 1991 produced mini album called "Gardens Of Grief", the album was filled with an unusual for such genres melodic compositions. After producing few more albums band split and that event created a lot of other interesting projects in many different genres that were later enjoyed by the public. Also influential for this genre was band Sentenced, who produced an album called "North from Here" and the Carcass with an album called Heartwork. Both of these albums were produced in 1993.

By the middle of the 90s Melodic Death Metal fully developed and found its own special voice. With emerging of a lot of bands of this genre, people started to distinguish two schools: Sweden, including Dark Tranquillity, In Flames, At the Gates, Hypocrisy, Edge Of Sanity bands, and Finland with Children of Bodom, Kalmah, Nail Down, Norther bands. By the end of the 90s the genre started to suddenly mix with other styles, such as: Black, Heavy, Thrash, Nu-Metal. And as a result other bands were forming, and boldly experimented with music, letting listeners enjoy the sounds of new compositions.

The most famous bands that belonged to this genre are Amon Amarth, Arch Enemy, Gates Of Ishtar, Skyfire, Ablaze My Sorrow, Mercenary, Dan Swano, Kalmah, Eternal Tears of Sorrow.