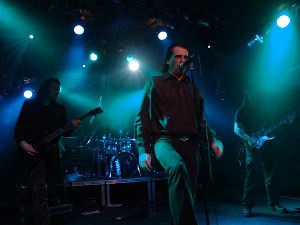 Dark Metal – is a mix of the Black, Doom, Gothic, and Death Metal. Music produced by this genre can be characterized by the mid-rhythm of the drums, low system guitars and sharp guitar riffs, as well as the keyboard support, and rare solo. In the Dark Metal genre there is a noticeable difference between each performer, due to the wide variety of the stylistic elements from different metal genres. The singing in this genre can vary from growling to the screaming. All of that depends on the preferences of the particular performer.

Lyrics also can be very diverse, however in most of the cases musicians following this genre talk about mystic, occultism, despair and suicide.

Dark metal for the first time emerged by the end of 80s in many different countries at the same time. It started in Germany, USA, Brazil, and Sweden. First bands influenced the genre were Hellhammer, Celtic Frost, King Diamond and Candlemass, they took popular at the time Scandinavian genres, such as: Black, Doom and Death Metal and filled them with even more gloomy and depressing atmosphere, scaring listeners with different keyboard effects and elements of magic and occultism. But real founders of this genre we consider a German band Bethlehem, who in 1992 produced an album called "Dark Metal", which gave a name to the new musical genre, and a band called Samael who made an album with an exotic name "Ceremony of Opposites", and Rotting Christ band with an album called " Triarchy Of The Lost Lovers".